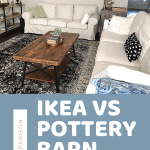 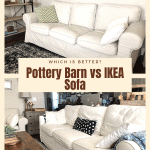 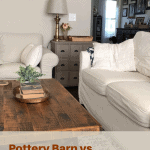 Couch shopping can be difficult because it’s a major investment, costly, and it’s meant to last for years. When we were couch shopping I debated between Pottery Barn versus IKEA sofas because there is a large price difference between the two.    If you’re deciding between those two, read on for my couch comparison.

If you’re looking for the short answer of which sofa is better – Pottery Barn or IKEA, here’s my quick opinion. After having both for over 3 years, I’d buy them both again, but I actually prefer the comfort of the IKEA more. And it is significantly easier to get the removable covers on and off again after washing.

We had brown pleather (is that a real word?) couches for years.  I didn’t like them one single bit.  However, they were a dream at the time when we had two tiny kids and a giant dog – lots of messes are made on couches by tiny creatures and slobbering dogs. Eventually, the time came for new couches.

This post contains affiliate links. We are a participant in the Amazon Services LLC associates program, an affiliate advertising program designed to provide a means for us to earn fees by linking to Amazon. See my full disclosure here.

I had my heart set on white couches and it seemed that Pottery Barn and IKEA sofas always came up in my searches.

Pottery Barn seemed to be out of my price range.  They are significantly more expensive than IKEA, but I also want a sofa/couch to hold up for years.

The only way I even scored this Pottery Barn sofa is because I tagged along on an outlet shopping trip with a friend and saw it in the outlet for about a 1/3 of the price of a new one.  It was a special order for someone else that returned it so it made it’s way to the outlet.

Outlet purchases are non-refundable by the way. So, we brought it home and my initial thoughts were that it is too big for our space.

The best part for me is the washable slipcovers.  I was nervous the first time about how easy it would be to get back on, but it is surprisingly quick.  I wash them in cold and dry until they are about 50% dry and then I air dry them the rest of the time.

So far, I haven’t had any issues with the covers shrinking – it is tough to get the main cover on again and I feel like I’m going to rip it every time I do it, but so far it hasn’t happened.

Another stroke of luck happened with this IKEA couch. My neighbor saw it on Craigslist for $150. It looked brand new and I’m not sure they ever even sat on it.

This couch turned out to be the perfect size for the other side of our living room and I love it too.  It’s from the Ektorp series (IKEA Ektorp) and it’s much smaller than its Pottery Barn friend, but that’s ok.  We replaced two old wing-backs with this couch and it gives us more seating options plus more than one person can stretch out.

It’s been a few years since we bought both of them and overall I love them both. But if I had to choose one, I’d buy the IKEA over the Pottery Barn.

After using them both for several years (and they get tons of use because they are our only couches), we all agree the IKEA is more comfortable.

Here’s a little recap of my Pros/Cons for both:

I know some people joke that if you’re out of college you shouldn’t be shopping at IKEA, but I disagree. For the price point, it’s an amazing choice and I’d definitely buy it again. Out of the four of us in my house, everyone says the IKEA is more comfortable and the Pottery Barn looks nicer.

We have two kids and dogs and so far I have no hesitation on white couches. If I can remove the covers and wash them and have them clean up as good as these two, there’s no problem!

2 Replies to “Pottery Barn versus IKEA Couch – Which is Better?”